It’s a sad fact that places can become synonymous with tragic events that occurred in them. Vietnam, for instance, may immediately bring to mind images of war for many people; when we travelled in Cambodia, I couldn’t help seeing the scars of genocide everywhere we went.   Similarly, we couldn’t ignore the huge mark the 9/11 terrorist attacks have had on the world, so while we were visiting New York City we chose to visit the 9/11 Memorial Museum and Tribute Center. I first visited New York City as an 18-year-old on a college trip in 2002, just months after the 9/11 terrorist attacks. We queued at Battery Park for tickets to the viewing platform at Ground Zero and I remember lining up, reading all the missing posters taped to the walls, then climbing onto the platform overlooking the pile of twisted metal and rubble. One American man stood next to us, sobbing over the wreckage.

Fourteen years later, those physical scars have been erased and Ground Zero has been transformed into the World Trade Center Memorial.  Huge square fountains now stand in the footprints of the original Twin Towers, the names of all those who died on 9/11 and in the earlier 1993 terrorist attack, are carved in stone along the edges. All around, signs of resilience reign in the new offices under construction and the One World Trade Center building, which stands taller than the original towers. 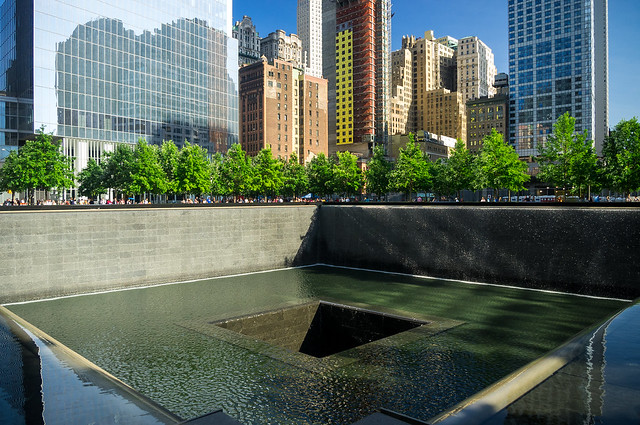 The 9/11 Memorial Museum forms a prominent part of the memorial square and over 23 million people have visited since its opening in 2011. We booked timed tickets to the museum months in advance and ended up spending an entire day inside; we found the experience at times reflective, harrowing, uplifting and informative.

The 9/11 Memorial Museum – What to Expect

The museum is encased in the foundations of the Twin Towers, original pieces of steel and remnants of structural columns are visible as you descend into the main exhibition space.  You’re confronted with eerie artefacts; wrecked fire trucks, missing posters, the last surviving column from the towers, which is covered in messages and the Survivor Stairs, which hundreds of people escaped down. Photo of the Twin Towers in the 9/11 Memorial Museum

An historical exhibition leads you through the events of September 11th, using film, audio, artefacts, photos and written words to tell the story of what happened on that day in New York City, at the Pentagon and on those four ill-fated flights. The physical artefacts on display are familiar yet strange – bloodstained shoes, worn briefcases, pieces of charred paper, faded Metro cards and twisted plastic ids. There are battered police and fire helmets, ripped uniforms and badges.  The artefacts and the people in the photos all seemed oddly old and dated to me; it’s easy to forget that the attacks happened 14 years ago, they still seem so recent.

The exhibition takes you right back to the day of the attacks. I’m sure many people, like me, vividly remember watching those events unfold on TV.  The news footage from that day is so familiar; the attacks touched everyone, altered the course of history and their impact is still reverberating in world events today.  That’s why the interactive elements of the museum work so well; audio booths and computer boards allow visitors to record their stories from 9/11. Some of these are shared in short films along with statements from witnesses and survivors and original telephone recordings from the day of the attacks. There was also a focus on understanding how the attacks happened, who perpetrated them and why as well as the aftermath of 9/11 and rebuilding of Ground Zero. A beautiful In Memoriam exhibition displays portraits of all the victims of the 2001 and 1993 attacks; visitors can watch videos about these people and look up information about their lives. In cinema rooms we watched an immersive film about the rebuilding of the towers and a documentary about how the attacks were initially responded to. We saw photo exhibitions of Ground Zero and listened to a talk from a museum curator about how they preserved the surviving Last Column.

We also paid a shorter visit to the 9/11 Tribute Center, which offers a completely different experience from the museum. The center is more intimate, with a small gallery display outlining the events of 9/11 and much more of a focus on the victims of the attacks and how people have been affected by them. There are videos of survivors and journalists telling their stories from 9/11, books full of messages from visitors to the center and space to add your own thoughts. During our visit we met and listened to talks from two people who experienced 9/11 first-hand; a woman who lived in Tribeca and ran out to help only to be enveloped in the dust cloud and another who worked in an office nearby and directed people away towards the Brooklyn Bridge. We heard about the mental scars of 9/11, how the area became a military zone after the attacks, how businesses were ruined and people were left jobless and homeless.

After our visit we walked home over the Brooklyn Bridge at sunset. As we crossed the water I couldn’t help looking back over my shoulder at the skyline and wondering what it must have been like to walk across there on 9/11, to see the towers ablaze or completely missing, a cloud of smoke in their place. Walking over the Brooklyn Bridge

I also thought about how the world has changed since 2001, when I was 18 years old and had barely heard the word terrorism before. Now, bombs are exploding every day in countries around the world and wars are forcing millions of people to flee across the sea in search of refuge. Just a week or so before our visit to New York, bloody shootings took place in Paris and later, MPs gathered in London to vote on whether to bomb Syria. Sadly, it seems that the world is now even more at war than ever before.

Our visit to the 9/11 Memorial Museum cost $24 per person; tickets can be pre-booked via their website. We booked tickets through Groupon to the 9/11 Tribute Center for $8 per person.