Despite having spent over two years in South-East Asia, I feel like we’ve barely scratched the surface of many countries in the region, especially Malaysia. We spent just three weeks in the country back in 2013 and most of that trip was spent watching wildlife in Malaysian Borneo rather than exploring the mainland. Now that we’re returning to Thailand to live, we’re hoping to explore Malaysia and its treasures in more depth on a return visit and visa run.

Flashback to Our Malaysia Trip in 2013

We were barely four months into our travel adventure when we flew to Kuala Lumpur in Malaysia. Back then, travel was still new; exhilarating, intense and a little bit overwhelming. I remember feeling that Kuala Lumpur was just the right mix of Asian and Western influences for me and I loved wandering the streets of China Town as well as heading to the malls in Bukit Bintang, which reminded me of London. Next we flew to Borneo on a quest to spot wild orangutans. Our search for these elusive, endangered primates took us deep into the jungles of Borneo; we sailed down rivers, trekked through dense forests and even camped out under the stars in Batang Ai National Park. A bat crash-landed in our camp and we were attacked by leeches and mosquitoes, but we also saw long-nosed proboscis monkeys, crocodiles, leaf monkeys and macaques. We were surrounded by exotic birds and the enticing, sometimes eerie, sights and sounds of the jungle. Us exploring the jungle in Borneo

Perhaps our favourite thing about Malaysia though was how welcome we felt. From the moment we arrived, people called out to us in greeting and were always eager to help. When we stopped to drop-off washing at a laundrette, the owner invited us to have lunch with her. When we couldn’t find a way to get to Batang Ai, a girl we met arranged for her Dad to drive us to the harbour and a boat driver took us to his family longhouse to stay. We were stunned by the kindness we experienced in Malaysia. Amy and Shem Chen, who helped us get to Batang Ai National Park

After a year of travel in Europe and the USA we’re almost ready to return to Asia, this time to put down temporary roots in Chiang Mai in Thailand while we work on building up our online income. As we intend to stay for at least six months, we’ll need to top-up our Thai visas by taking at least one visa run which we’ll combine with a trip to explore Malaysia. After a stop in Kuala Lumpur to renew our visa (something we also did back in 2013) we’d love to explore some of these sites in the north of the country:

Penang is an island on the north-west coast of Malaysia. We’re intrigued by the capital George Town, which has been designated a UNESCO World Heritage Site for its mix of British, Indian and Chinese architecture and cultural influences. There’s plenty to explore, from a national park to museums, forts and historical homes. Penang is also famous for its street food, which offers a tantalising array of Malay, Chinese and Indian flavours. As a vegetarian and fussy eater I found Malaysia to be one of the best countries in South-East Asia food-wise; I ate so much tasty Indian-Malay food while I was there, so I’m looking forward to sampling more in Penang.

We love visiting mountainous areas in Asia, some of our favourite trips have been to tiny mountain-towns like Sapa in Vietnam and Sagada in the Philippines. So, we’re bound to love the Cameron Highlands, which lie just three hours away from Kuala Lumpur. We’d probably stay in the tourist-friendly town of Tanah Rata and spend our days trekking through lush, green tea plantations, visiting volcanoes and strawberry farms. 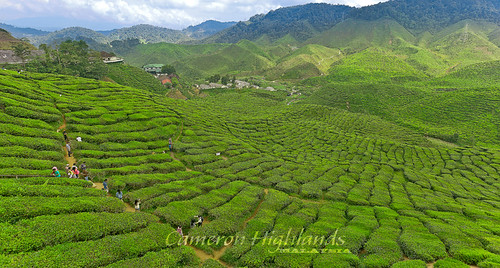 The Perhenthian islands are located on the north east side of Malaysia and are famous for their sandy beaches and clear blue waters which offer spectacular snorkelling and diving opportunities. After months of living in Chiang Mai, I’m sure a dose of sea and sand will be more than welcome. We’d probably stick to visiting Perhentian Besar, one of the quieter islands visited by couples and families rather than young, partying backpackers. The Perhenthians sound a lot like the Gili Islands in Indonesia, which we also enjoyed for their peaceful vibe and great snorkelling.

Have you been to any of these places in Malaysia? Do you have any other recommendations?