Posted at 13:25h in Indonesia by Andrew Wyatt 0 Comments
0 Likes

Unbelievably, it’s been three years since we touched down in our first Asian country: Indonesia. Although we went on to spend over two years travelling and living in South-East Asia, I’ll never forget the strangeness and excitement of that first week in Java. I remember the intensity of the sounds and smells; the beeping throngs of traffic, the humid wall of heat, the spicy food, ornate temples, smoking sticks of incense and huge spiders. Back then, Indonesia was one hell of a culture shock for us and after struggling to adjust to the sprawling capital city, Jakarta, we took a seven-hour train ride through vivid green rice fields to Yogyakarta.  Jogja, as it’s often referred to, is a smaller town located in one of the most seismically active parts of Indonesia, so the surrounding countryside is littered with volcanoes as well as ancient temples, misty mountains and acres of rolling fields. 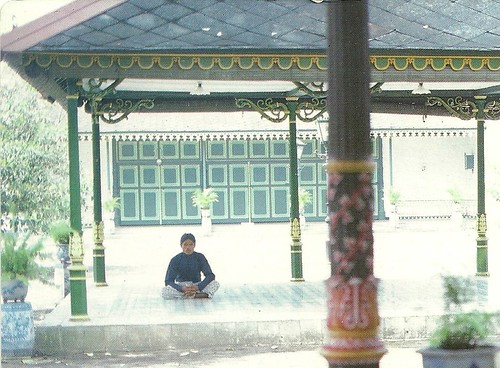 There’s plenty to see in Yogyakarta itself, including museums, art galleries, the impressive Sultan’s Palace complex and many stone Buddhist and Hindu temples (Candi) which date back as far as the 7th Century. Most tourists use Yogyakarta as a base to explore UNESCO World Heritage Sites nearby, including Borobudur Temple, which has become Indonesia’s biggest tourist attraction. There are plenty of hotels in Yogyakarta to cater for the hordes of visitors; we stayed in a budget guesthouse but more luxurious options are available such as the Hotel Tentrem Yogyakarta, which can be booked through Traveloka. The main street in Yogyakarta, Indonesia

We hired a driver through our guesthouse to take us on a day trip to Borobudur and this turned out to be the highlight of our trip to Yogyakarta.  As soon as we got out of the car we caught our first glimpse of the pyramid-like stone structure set against a backdrop of hazy volcano-tops and rice fields. After tying sarongs around our waists we made our way up the steps to Borobudur, awed by its sheer size and the fact that it was entirely built by hand over 75 years back in the 8th Century. For many years, the temple lay forgotten under volcanic dust before being resurrected and designated an important historical site.

Borobudur is decorated with bell-like structures, hundreds of Buddha statues and impressive carvings. We spent a couple of hours wandering around the temple, taking photos and marvelling at the views from the top of the temple. As we explored, groups of friendly Indonesian tourists approached us, eager to practise their English and have their photos taken with us.

Borobudur isn’t just an historical site and tourist attraction; it’s a religious site for Buddhists, who come to worship at the temple. So as with any religious or cultural site, it’s important to dress respectfully and cover up with a scarf or long-sleeved clothes when visiting and behave respectably in this sacred space.

On our way back to Yogyakarta, we stopped at another UNESCO site, a Hindu temple called Prambanan. Both these temples remain some of the most impressive we’ve seen in Asia, along with Angkor Wat in Cambodia and the hundreds of stupas which decorate the countryside in Bagan, Burma. From Yogyakarta, our six-week Indonesian adventure continued with a midnight tour of Mount Bromo followed by a few idyllic weeks of relaxation in Bali, which including an eco-cycling tour and a terrifying trip to the Monkey Forest in Ubud. Our time in Indonesia ended with a trip to the Gili Islands, which were some of the most beautiful we’ve visited in Asia. Unfortunately we didn’t get around to visiting Flores to see Indonesia’s famous Komodo Dragons, but as we’re heading back to Asia in August, a return to Indonesia could be on the cards.