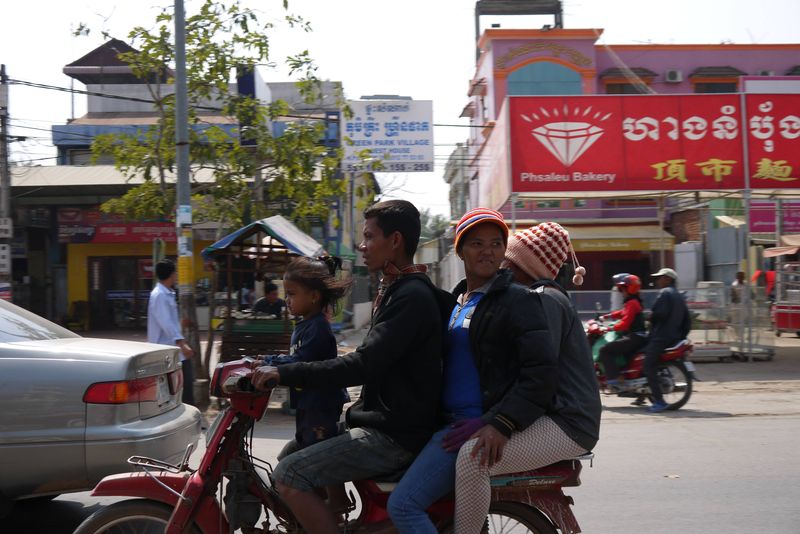 24 Feb Snaps from a Tuk Tuk

One of the best ways to catch a glimpse of life in Asia is to take a ride in a tuk tuk. As your driver speeds dangerously and weaves through stationary traffic you’ll experience the true sights, sounds and smells of Asia. It’s likely that you’ll be assaulted with the smell of exhaust fumes, rubbish rotting in the sun, meat cooking on open fires, incense and fruits from market stalls; your ears will be filled with the sounds of beeping horns, the calls of market sellers, the thrum of music from nearby shops, monks chanting, the crowing of roosters and the barks of stray dogs.

Whether you’re travelling through the city or the countryside, one thing’s for sure, everywhere you go you’ll see people zipping past on motorbikes; often whole families will be crammed casually onto one bike while other single riders carry incomprehensibly-heaped loads of vegetables, bamboo baskets, boxes or even live animals. We’ve been in Asia for almost a year now but still these sights never cease to amaze us.

Our Snaps from a Tuk Tuk

To give you a taste of life in Asia, here are some of Andrew’s best snaps from a tuk tuk ride we took in Siem Reap, Cambodia. It’s not the clearest picture but yes, those are pigs on the back of the bike in that last shot!